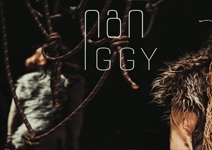 “Igi” is the stage version of one of the remarkable stories written by Jemal Karchkhadze, the 20th-century Georgian publicist and writer, which tells the story of human evolution, from prehistoric times to the formation of personality and the fight with the environment and society since then.

The performance is the synthesis of drama circus and traditional theatre.
Body language depicts the feelings that “Igi” might have sustained and for grasping the depth minimal narration is added. (in English and Georgian languages)